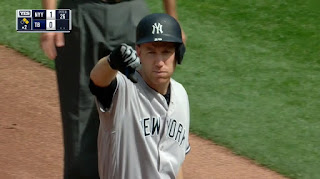 One of the common sentiments among Yankees fans since the end of the season has been the desire to sign Todd Frazier this offseason to keep him in pinstripes. Believe it or not, the two alternatives of this decision form a complex and difficult conundrum for the Yankees and actually could shape the entire offseason strategy for the front office. Time to elaborate.

It starts with simple question. Do we want to bring Todd Frazier back? Or not? The answer actually has far reaching implications. This is possibly the most difficult question to answer of all. There are many pertinent considerations.

After being traded to the Yankees, he became popular with the fans and was a leader in the clubhouse. He and Aaron Judge started the thumbs down craze, which was a crowd favorite. His leadership had a positive impact on the entire Yankees team. Many of the young players latched onto him and learned a great deal.

In the playoffs, he came up with several clutch hits. He started and finished several important rallies that helped get the Yankees where they were going. He was 8/43 throughout the playoffs with two doubles and a homerun. He also had four walks. That gave him a .186/.239/.302/.541 line in the playoffs. As well liked as he is, anyone looking at that stat line has to acknowledge it’s really bad. Let’s call it what it is though, a small sample size against some of the best pitching in the league.

It’s important to note that this guy oozes leadership and charisma. From a clubhouse perspective, they should keep him around for sure. Emotionally, most Yankees fans would like to have him back. I played baseball against him all through little league and high school (we are the same age). I would love to see him continue to play for my favorite team.

He is an above average defensive third baseman, he hits a bunch of homeruns, and has accumulated a 22.0 WAR (wins above replacement) in his career. This past year, he had a WAR of 3.4. Combine this with his longing to be a Yankee and the leadership skills, and it’s safe to say you want this guy back.

There are, however, reasons to reconsider that notion. The Yankees already have Chase Headley at third, and Greg Bird at first. They have Gleyber Torres and Miguel Andujar in the minors, and both look like they are ready for the big show. Gleyber could be moved to second base, but they already have Starlin Castro there. Signing Frazier without making another move would almost certainly block Torres and Andujar from playing in the majors next year, and possibly beyond (depending on the length of the contract).

The low average is also frustrating. It’s no fun watching a guy strike out or hit pop ups in key situations over and over again. Those types of guys can be rally killers. He also has only had a couple of seasons where he had an OPS over .800, and the most recent was all the way back in 2015.

The other consideration is the opportunity cost. What does signing Frazier cost you in terms of getting under the luxury tax threshold? What other players could you have signed with that money that may have benefitted the team more? Does signing Frazier prevent them from being able to sign a top notch starting pitcher? These are all valid concerns.

With all of this to consider, you start to see how complex this decision becomes, and how it really does depend on how you approach the rest of the offseason.

Once you have decided whether or not you want Todd Frazier on your team, you then have to decide how you will approach the rest of your offseason.

If the answer is yes, the first question that must be answered is the contract. Personally, I don’t think you can keep Frazier on anything other than a one year, hometown discount, prove yourself for next offseason type of contract. There is a legitimate argument that he might go for that, especially with his love for this area and the New York Yankees. I tend to believe it is rare that you have a player who is this altruistic. Nor do I think they should be. I have yet to meet the owner who wants to give away his money to make the players wealthier, so why should the players do that for the already much more wealthy owners? Most of the time, you will go where the money takes you. For Frazier, I believe that money will be in the neighborhood of 3-5 years, $10-12 million per year.

For the record, if the contract is three years, $12 million, or 5 years, $10 million, I am not interested. That said, an argument could be made that the Yankees should go for it at three years, $12 million. This contract, in my opinion, would block their excellent infield prospects for too long. They have players in the minors who could be as productive as if not more than Frazier at less than 1/10th of the cost. These are legitimate prospects too. One of them is widely considered the top prospect in all of baseball (Gleyber Torres), and the other is likely a top 100 prospect now (Miguel Andujar).

Assuming that the Yankees want to sign Frazier, and are able to (regardless of the cost), the next question is what to do about the rest of infield. One option would be to do nothing else. This option would leave the Yankees with the same infield they had in the playoffs. It begs the question of what to do with your top prospects. The answer to that is quite simple. The Yankees have shown a recent willingness to dump players who are not performing, no matter how big the contract (see A-Rod). If Headley or Frazier doesn’t perform, dump them (this only works if Frazier is on a one-year contract). If both are performing, and your prospects are not ready, you stick with them. If both are performing, and your prospects are ready, you trade one of them, go with your prospects, and DH the other.

Another option would be to trade either Headley or Castro. If you trade Headley, you still have the space to move Frazier to the DH and play your prospect at third. If you trade Castro, you could start Wade at second base at the beginning of the year and then give Torres his shot when he is ready. This is a bit riskier, as you could end up with Wade at second all year if Torres doesn’t prove himself healthy and ready. If Wade is the guy he was last season, then this would be a significant downgrade from Castro.

Ultimately, having too many options at a given position is a good problem to have. Trading from a position of strength is always something you can do. The $12 million it would take to sign him wouldn’t put a huge dent in the luxury tax either. On the other hand, if the money it takes to sign Frazier takes the Yankees out of the starting pitcher market, then a Frazier reunion is not in the cards. Manipulating the roster with trades could also make this signing work.

The decision lies with Brian Cashman. I am not optimistic that there will be a match. If I am Cashman, the only way I bring Frazier back is on a one-year deal to a hometown discount. If I am Frazier, I don’t take that deal. Getting Frazier to the right deal would be a good move for the Yankees. The only problem is, the right deal is not likely to entice Frazier to stay in the Bronx.